You are currently here! Receptions THE BOUQUET TOSS EXPLAINED 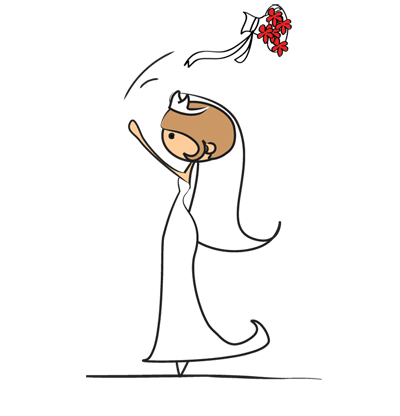 There are so many different traditions a bride and groom can follow during their big day. One is the bouquet toss, which is a wedding tradition that is slowly dying. Many years ago the majority of weddings included a bouquet toss. Today, more and more couples are foregoing this tradition, with only about 30-40% of weddings still partaking in it. So why does the bouquet toss exist and where did it originate? 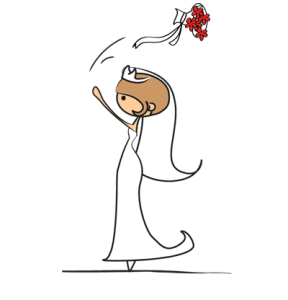 The bouquet was originally incorporated into weddings as a sign of fertility for the bride. In ancient times, brides would walk down the aisle carrying a bouquet of herbs, such as garlic and dill. These herbs were also believed to ward off evil spirits. Over time, the bouquet evolved to include florals and to become the extravagant arrangements that they are today.

As far as why the bride actually started tossing her bouquet, this tradition began in England in ancient times. The bride was believed to have good luck on her wedding day, so her guests would try to rip off pieces of her dress and bouquet so they could have her good luck. Wedding guests would get pretty aggressive with this and chase the bride. To escape, brides started tossing their bouquet to wedding guests to distract them so they could get away.

As with most traditions, the bouquet toss has evolved over time.  In today’s modern world, the bouquet toss has progressed into a show at the wedding reception. All of the single female guests are paraded onto the dance floor to try to catch the bouquet. The catcher is deemed the next female to get married. We’ve seen bouquet tosses all over the spectrum, from only a few women trying to catch it, to a full on pushing, shoving, tackling and no holds barred wrestling match short of a UFC fight, to be the winner.

As we mentioned earlier, at each wedding we DJ we see less and less couples including the bouquet toss tradition in their wedding reception. We have found this to occur for several reasons, the main reason being that couples are getting married later in life. Due to this, there are less single guests at weddings. To put the spotlight on only a handful of single women at a wedding can be embarrassing for those partaking. Most couples just don’t want to make their guests feel uncomfortable, so they are passing on the bouquet toss tradition. Another thing is that that the garter toss usually follows the bouquet toss, which sometimes can be an awkward experience for guests and children in attendance. So if the garter toss is not happening, usually the bouquet toss is as well.

With the bouquet toss having been a wedding tradition for hundreds of years, we hope it will stick around for a little more or maybe even a new tradition takes over in it’s place. We hope you enjoyed this blog entry on the bouquet toss explained and if you have questions about your wedding, or would like to know more about traditions, feel free to contact us here at Kalifornia Entertainment. We are well-versed in many different types of traditions, including ones from different regions around the world.